This morning we spend some time on domestic chores; washing clothes in the bathroom basin and boiling water in the kettle as there is still no hot water. Two weeks until the city hot water is turned back on. This will be interesting as our exhibition is opening on the 28th of May and the city water will be back on 1 June. We may need to book a hotel in another city to have a proper shower before the show. It is interesting how everyone takes this in their stride whereas if this were to happen in Melbourne, no hot water for two weeks there would be strikes and screaming in the streets… Almost.

Togsoo’s picture framer came and measured up my canvases this morning. He will make up stretchers for the exhibition and we can re-stretch the paintings in a day or two when he makes the returns with the stretchers. There is a large difference in cost of stretchers in Mongolia compared to Australia. There is an enormous difference with most things and surprising to find what is more on parity. We have bought ourselves new pillows, pure cashmere wool pillows too good to leave behind costs very little in comparison to what we would expect to pay at home. When we visited the art supply shop I was also able to buy beautiful brushes at low cost.

The Internet has been a disappointment as the data I bought recently was used up almost immediately and now it seems I will need to try to work out of free Wifi locations over a coffee.

Our invitations and brochures arrived today from the printer. That is a fine service for Togsoo only ordered them less than 24 hours ago. The printer has made a good job of the brochures which strong colour and crisp print. We have Mongolian writing on one side and English the other. We have advertised Both exhibitions on the one card following the Desert Sharing theme from our first exhibition. If we do a show in Melbourne it will become Desert Sharing Four.

Ulaanbaatar is more familiar second time around. I am already used to the broken footpaths and needing to care for my life when crossing roads. There are visible changes around the town, but not so much in our district.

Togsoo had visitors to her studio today from Australian Soroptomist group. Togsoo is now the president of the local group and welcomes visitors when they arrive. As if to prove this is a small world the visiting women came from Melbourne and one of them Janette told me she had come to my exhibition of and Mongolian Paintings ‘From The Edge’ at Montsalvat in 2010; and that Kevin Brophy who opened the show is her brother.

In style Togsoo had tickets to the Theatre tonight to see a Mongolian production of Cats. It was again an extraordinary show with fine acting as it seems the Mongolians are only capable of producing. The voices had a Mongolian strength that gave them away from other western voices. The costumes were striking and the performance tight. At the end of the show there was nearly as much time with the ceremony and the mayoress of the city came on stage to announce the new theatre that would be built in the city. 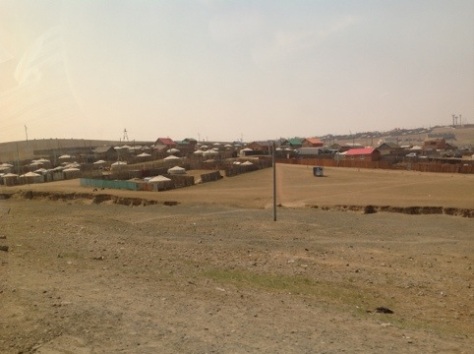