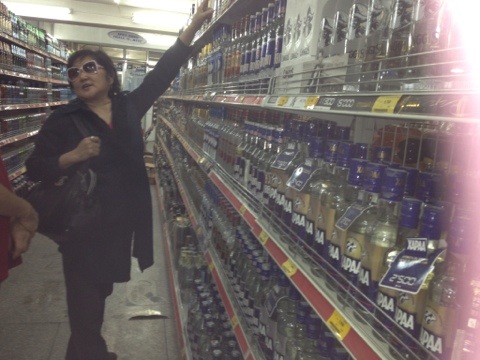 Walked from our apartment block to the Ghingis Hotel to use Wifi and look around. Australia should never complain about about our streets or infrastructure. The sharp contrast between our cities is apparent when walking the streets. The pavement is generally broken due as much as anything by the extreme weather conditions the country suffers. Great lumps of concrete or blocks are raised, holes and pieces of steel rio jut from buildings and paths. Edges of buildings often are sharp and it is up to the individual to be careful when going about. Man holes are often without covers and may or may not have lumps of concrete lossless covering them. This is not a wheelchair friendly city. The paths are often broken by a concrete curbing you need to step over. And yet these streets are walked by elegantly dressed women wearing the highest fashion heels. For me, flat shoes are still awkward.

Walking along the river path this morning we notices great shells of ice formed on the cool underside of the bridges. these must have been at leat one and a half meters thick, left over from the frozen winter river freeze. A homeless persons camp was made beside the ice under the bridge.

The city is in an obvious state of change as new apartment blocks rise all around the city. The old soviet apartment blocks are tired and looking shabby as the paint work and iron grills covering the windows stress from the harsh climate. Cracks and lumps of concrete loosen and fall with age.
New apartment walled enclaves are developed with grand gates and gleam with fresh paint; in waiting of the new Ulaanbaatar that is sure to come.

We are living in an older part of town where the Soviet style apartment blocks are built on a regular grid with a park of shorts in the centre of each apartment tower. A children’s playground with painted steel equipment for residents is provided. This equipment would have been removed years ago from our parks; deemed unsafe. Here they are used constantly by happy laughing children. On bench seats outside the apartment blocks sit older residents in an array of traditional dell and western clothing.

Some happy children are riding bikes clearly delighted with the new road surface that was laid yesterday. The black tar is a bright addition to the dusty block.

We met up with Lkhamma and her husband in the evening. Lkhamma stayed with us in Melbourne on her vist last year. Lkhamma is the Foreign Arts contact for the Union of Mongolian Artists where our second exhibition will be displayed in there beautiful gallery in the centre of town.

We were taken to dinner at a fine Indian Restraunt in a fine hotel. Her husband, Tugi owns a printing business and will be able to print my photography for the exhibition. He explained he has a very good Japanese printing machine exported recently. He also has a Chinese machine. If the Chinese machine breaks down they need to bring in a Chinese technician. This requires first contacting the makers, organizing a visa for the Chinese to enter Mongolia, organizing accommodation and a process and down time of at least two weeks for the business. It makes it very difficult to compete in business as there are many printing shops in UB.

We were woken in the evening by the sound of shouting emanating from the apartment next door. Alcohol is a problem here, as anywhere. Tugi explained vodka was the problem here and not so much with illicit drugs as in other places. Vodka is cheap, as little as four dollars a bottle, up to maybe $20. I asked if there was any difference in the quality of the taste between the cheap and the more expensive. Tugi says no, only in the quality of the glass and the labels. In the countryside where vodka is fermented by the country people is there a marked difference. The country vodka is much softer. Togi owns a ger camp and has promised to take us out to his camp for a weekend.